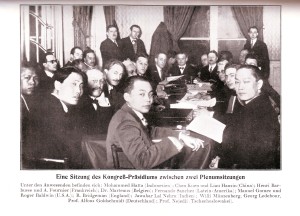 In 1946, an unknown writer remembered and described the Hungarian Laszlo Dobos as “a smooth operator”, a person that had been active under the name of Louis Gibarti (1895-1967), and was intimately connected to Willi Münzenberg‘s activities. I will not here go further into detail about Gibarti/Dobos life and career in the international communist movement during the interwar years. However, the definition of Gibarti as “a smooth operator” aptly describes his life and the ambigous traces left behind in the Comintern Archive in Moscow, traces that leave more questions than answers. While some of the active individuals in the Comintern left a trail of documents, compiled and categorized in personal files, Gibarti’s personal file consists only of half a page (see below), which, in all of its scarceness, give no substantial evidence or clues about his actual role or contributions in various communist movements or activities during the 1920s-30s.

Still, Gibarti is a fascinating character in the history of international communism, a person that played a part in shaping the outcome of the League against Imperialism and the Anti-war movement in 1932 (the Amsterdam Congress in August, 1932) to mention a few examples. In 1941, the political police in Madrid arrested Gibarti “while trying to cross illegally Spain”, whereupon he spent 27 months in Spanish prisons and camps. After the Second World War, Gibarti held a position in the UNESCO, later suspected of being an informant for the FBI in connection with the communist spectre beginning to haunt the USA as the Cold War made its entrance. In 1955, Gibarti re-established some of the contacts from the 1920s as he interviewed the Indian Prime Minister Jawaharlal Nehru in the French paper Le Monde diplomatique in relation to the Afro-Asian Conference in Bandung 1955. Thus, this is one of several historical threads which link together the Bandung Conference in 1955 with the “First International Congress Against Colonialism and Imperialism” in Brussels 1927.

Below follow Gibarti’s “total” personal file in the Comintern Archive:

The sparse content in Gibarti’s personal file in the Comintern Archive stands in stark contrast with his personal file, located in the British National Archives in Kew Gardens, London. The dossier contains documents and accounts which entails a thorough understanding of Gibarti’s life both within and outside the international communist movement. The history of Gibarti will be continued…

On 10 February 1927, the “First International Congress against Imperialism and Colonialism” in Brussels marked the establishment of the anti-imperialist organisation, the League against Imperialism and for National Independence (LAI, 1927-37). The complex preparations for the congress were though initiated already in 1925 by Willi Münzenberg, a German communist and General Secretary of the communist mass organisation, Internationale Arbeiterhilfe (IAH, 1921-35), together with the Communist International (Comintern, 1919-43). Berlin was the centre for the LAI and its International Secretariat (1927-33), a city serving the intentions of the communists to find colonial émigré activists in the Weimar capital, acting as representatives for the anti-colonial movement in Europe after the Great War. With the ascendancy to power of the Nazi Party (NSDAP) on 30 January 1933, the LAI reached an abrupt, but nonetheless, expected end in Berlin. This book, based on Petersson’s doctoral dissertation, examines the role, purpose and functions of a sympathising organization (LAI): to act as an intermediary for the Comintern to the colonies. The analysis evaluates the structure and activities of the LAI, and by doing so, establish a complex understanding on one of the most influential communist organisations during the interwar period, which, despite its short existence, assumed a nostalgic reference and historical bond for anti-colonial movements during the transition from colonialism to post-colonialism after the Second World War, e.g. the Afro-Asian Conference in Bandung, Indonesia in 1955. Fredrik Petersson’s study, based on archives in Moscow, Berlin, Amsterdam, London, and Stockholm, uncovers why the Comintern established and supported the LAI and its anti-imperialist agenda, disclosing a complicated undertaking, characterised by conflict and the internal struggle for power, involving structural constraints and individual ambitions defined by communist ideology and strategy.
Publisher: Queenston/Edwin Mellen Press
Publication Date: Nov 15, 2013