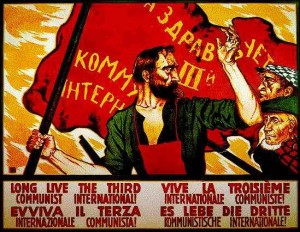 In November-December 1920, European communism took another step in consolidating itself as a movement after the Second International Comintern Congress in Moscow. The recently established communist party in Great Britain had formed information centers, places that functioned as distributive channels to spread the sanctioned literature of the Comintern. For the British communist movement represented London a crucial hub, where the ”B.S.P. Literature Dept. 21 Maiden Lane, Strand, London W. E. 2” and the ”Workers Soc. Fed., 400 Old Ford Rd., London E. 3” were the preferred locations to visit, or contact in order to find socialist and communist literature. The Communist Party of Great Britain (CPGB) also had a center in Glasgow at the ”S. L. Press 50 Renfrew Str”, and in South Africa at the office of the International Socialist League in Johannisburg (P.O. Box 4179).

To coordinate the distribution of this canonical literature, the Amsterdam Bureau of the Executive Committee of the Communist International (ECCI), an organisational body established in 1920 on Lenin’s personal instructions, organised and supervised this operation. The functions of the Amsterdam Bureau was to act as a connective administrative hub for the Comintern outside of the Soviet Russian border, involving the control and supervision over the communist movement in Western Europe after the Comintern’s foundation in 1919. In Amsterdam governed the Dutch communist and Comintern emissary Sebald Justius Rutgers the bureau, while in Berlin, the so-called ”partner”, the West European Secretariat, was run by Yakov Reich (”Thomas”).

An examination of the Amsterdam Bureau collection (fond 497) in the Comintern Archive disclose a number of documents/lists that informs us about what kind of literature the communists should read and circulate among its members, or use while recruting new supporters. In the British case, one wonders therefore what was on the ”reading list”? Below follow, in alphabetical order, the canonical literature of British communism in 1920: